Greetings from the Apocalypse 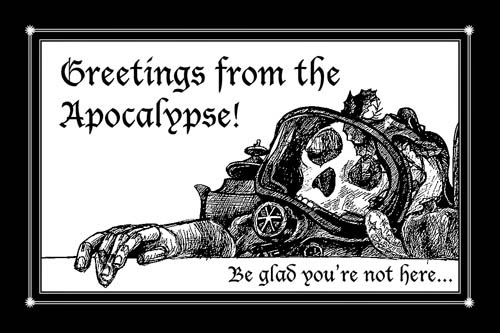 Edition of 50 postcards for Keith Buchholz Fluxus publication:
Hand-written on each:  “How can we be absolutely sure that the world didn’t end on Dec. 21, 2012?  What if we just didn’t notice?”

Posted by ChaoticBlackSheep at 12:00 PM

ChaoticBlackSheep
I am a predominantly conceptual artist working in a variety of media and techniques, including performance & installation art, assemblage, video, fiber, drawing and more. I explore many different themes and ideas in my work, including environmental concerns, institutional critique, feminism, identity issues and so on.

Other Websites Featuring My Work